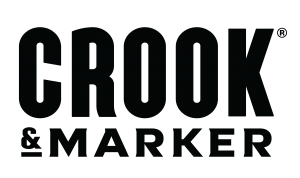 The black sheep is also known as a “Marker.” A shepherd places one Marker among every 100 white sheep to help him keep track of his flock. As he watches over them, the shepherd wields a heavy Crook to corral his sheep.

But the Marker is a fighter who resists the shepherd’s power and refuses to be penned in – a standout who leads the flock on a journey to Be Unbound.

In founding Bai Antioxidant Beverages, I launched a “Bevolution” to overturn the conventional wisdom that says “good for you” and “great taste” can’t co-exist. We clashed for years against Big Soda to deliver flavor-packed drinks without mounds of sugar and artificial ingredients.

Now I’m at it again.

With Crook & Marker, we’re going to battle with the traditional shepherds of the alcohol industry to prove that people can feel better about what they drink while still having a good time. Our weapon? The only spiked and sparkling beverages of their kind: Zero sugar. Made with organic alcohol. Overflowing with bold, refreshing flavor.

We’re determined to help people to Be Unbound from the same old choices. And just like the Marker who sees that ominous Crook looming overhead, we refuse to be penned in.

Learn More About Crook & Marker By Visiting Their Website.